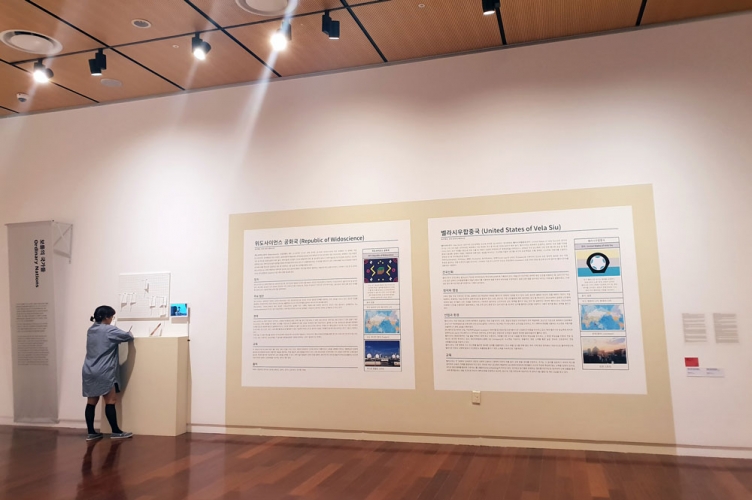 Ordinary Nations, 2016~ongoing
Since 2016, Hyemin Park has held multiple workshops with a specific group of people to develop the theory of an imaginative nation, a utopia where everyone would desire to live. Park posed five questions regarding immigration, education, industry and environment, politics and administration as well as development and distribution, and then grouped those participants together who shared similar ideals. Each team discussed their opinions and made decisions based on mutual agreements. The "Republic of Widoscience" was created through workshops with second generation Korean-Austrians aged 10 to 13 living in Austria. The "United States of Vela Siu" were developed through workshops with Korean students aged 13 to 15 living in Incheon, South Korea.

Vela Siu is an island located near Southeast Indian Ridge. Its official name is The United States of Vela Siu. Even though its area and population are small in size, it is one of the richest countries in the world and boasts a very high per capita GDP. Vela Siu is well known for its abundant oil and mineral resources. In the past, the country achieved significant economic growth by focusing its efforts on oil exports and its automobile industry, but in recent years, Vela Siu has become increasingly eco-friendly by levying heavy taxes on automobiles, one of the major contributors to air pollution and climate change emissions. As early as 1994, due to human-induced climate change and rising sea levels, the country embarked on a national research project on vehicles using hydrogen fuel and now also exports such vehicles.

Vela Siu comprises five states: Character, Eye, Po-Hand, Wifa and Lim-Jay. Vela Siu is a direct democracy where people cast votes on all political decisions. The country’s biggest city is its capital, Lincheon, which is located at the center of the five states. Both English and Vela Siuan are official languages.

Foundation Myth: The foundation myth of Vela Siu is recorded in the Wifi, a history book written by Yun. God came down from heaven to earth and traveled to many parts of the world. He was fascinated by the mystery of the deep sea near the equator in South Asia. Using a magnifying glass, he looked deeply into the sea with heavenly light. As the strong light penetrated the water, the sea flinched, causing a dark land mass under the sea to rise above the sea surface.

Politics and Administration: Vela Siu is composed of 5 states and governed according to the Vela Siuan Constitution, which was proclaimed on May 26, 2000. Vela Siu is well known for its direct democracy. Citizens discuss and cast votes on each and every issue and are thus directly involved in all political decision-making processes. In 2017, Vela Siu became one of the countries adopting refugee-friendly policies. Currently, many countries refuse to accept refugees or take a rather passive approach to the refugee crisis due to the rapidly increasing number of refugees since 2015. However, Vela Siu announced that it would accept refugees for humanitarian reasons and soon after established policies to accept and help refugees settle down in Vela Siu through a three-step process, including a personal background check and an environmental awareness screening.

Industry and Environment: Vela Siu is one of the biggest oil exporters in the world thanks to its abundant oil resources. As of 2017, the country also boasts the tenth-largest reserves of rocks, soils and minerals and is regarded as one of the most advanced countries. Recently, the country put great emphasis on the significance of climate change and achieved significant economic growth by exporting hydrogen fuel vehicles which use organic chemicals as fuel.
The entertainment industry – including animation, the character industry, and virtual PvP (player vs player) survival games – accounts for a significant portion of the country’s economy. Lim Jay, which is located in the southeastern part of Vela Siu, is often referred to as a modern style colosseum where the gambling business is developed to the level of Las Vegas and Macau.
Vela Siu is one of the best countries in the world in terms of the advancement of eco-friendly technology. When oil is exported to other countries, environmental taxes are collected, which are then invested in research on eco-friendly fuel and energy. The “H2” company's hydrogen-fueled automobiles boast high fuel efficiency and eco-friendly fuel oxides (H2O) by using efficient lightweight materials.
Vela Siu has helped create important outcomes to counter climate change. The country has made continuous efforts to reduce carbon dioxide emissions by chairing many international environmental conferences and by signing on to the Vela Siu Protocol.
​
Education: Vela Siu has recognized the right to education for all people aged between 7 and 15 regardless of social or economic status. To that end, the country has established schools to provide equal educational opportunities for everyone. More recently, however, some opposition has formed to the uniform public education system and homeschooling has become increasingly popular, with parents educating their children by using media such as the Internet or videos, depending on children’s needs. Vela Siu permits home schooling on the condition that homeschooled children participate in a quarterly camp run by the country’s Ministry of Education, which encourages group activities. As of 2017, about 20 per cent of all school-aged children are homeschooled and attend these camps.

Pankattan
Nation Incentivizing selfishness for the good of all

Basic information: Pankattan is an island country located north of the Koava Sea. Woods and fields account for a large portion of the land, which results in the very small available area of 3.8%, and consists of 16 states and 282 communities (as of 2018) centered on highlands and lakes. Give or take, there is an average of 150 people living in a community. Although there is no official capital, the city of Johadan., located geographically in the center of Pankattan, serves as the administrative capital. English is the official language.

Politics and Administration: Although there is the supreme law, Pankattan Constitutional law, the community law (or the community assembly) is very influential. Pankattan is unique in that each community has very distinct characteristics as they recognize all legislative and administrative affairs on their own and have implemented a community decentralization system that exercises its authority.
As it has adopted direct democracy, people actively participate in national and community policy issues. The public participates in policy decisions based on debate rather than voting and votes only when it is difficult to reach a conclusion through discussions.
In addition, anyone who obtains signatures from more than 100 citizens (or people) in the community, usually within 12 months, can apply for revision of community bills. If a list signed by 50 citizens is submitted within 120 days of the law passed by the Community Congress, they can request a referral to the Community People's Debate.

Economy: It is a free-trade country, and the IT industry is the mainstay of the economy in that people also work in the field of internet broadcasting, Multi-Channel Networks, YouTube creator studio. It has the highest rate of working from home in the world, and the corporate form of the co-working space is very common.
Privatization of private property is accepted but property after death is returned to the community because it does not accept an inheritance. It also imposes a high-income tax of 41.9 percent on economic activities, next to Belgium (42.8 percent). There are various kinds of taxes, including taxes on car possession, environment tax on all kind of environmentally hazardous products including meat, disposable or plastic products, and community service, as well as income taxes.
Due to the high taxes for private car owners, the distribution rate of automobile traffic is low. On the other hand, public transport, including rail and water transportation, is highly developed, making it easier to move between regions even in rough terrain. For the high-tech, eco-friendly public transportation system, Pankattan signed a contract with The Boring Company operated by Elon Musk and plans to complete it by 2021.

Society: The national slogan is “Incentivizing selfishness for the good of all".
Refugee policy of Pankattan is based on cultural homogeneity of local communities in that is aims to deter the entrance of refugees in Pankattan, tightening the entrance and detention system. It also facilitates the rejection of asylum applications from ‘safe third country and deports ‘bogus’ refugees.
Pankattan is considered a country that is relatively easy to move between classes. It is a welfare state that provides welfare to the people based on social rights ideas, and the health insurance, age insurance, widow insurance, and employment insurance act was established under the national Constitution. Medical welfare is considered the best in the world, and in addition, women's hygiene products including tampons and pads and condoms are provided free of charge by the community government.
Religious tolerance is guaranteed, and religious discrimination is strictly prohibited. Freedom of mass protest,-freedom of speech is guaranteed (but money is not speech. This should be regulated), - and same-sex marriage, abortion, euthanasia, and all drugs are legal. In the case of drugs, drugs and their cultivation are legal, but unauthorized transportation and sales are severely punished.
Pankattan is a very eco-friendly country. The Environmental Performance Index (EPI) was 82.20 as of 2018, which is the world's third-highest. Nationwide, it encourages vegetarianism, and high environmental taxes are imposed on all meat-based food materials. As a result, 45 percent of the people in Pankattan are vegetarians, the highest proportion of vegetarians in the world. Also, all livestock are grazed to protect animal rights.

Education: The compulsory education system was established in 1969, and the community takes responsibility for all education. Detailed curriculum and education systems vary slightly from community to community. However, it is common to learn how to read by the age of six and complete three sets of three-year courses. Training courses can be selected, but military education and community history are compulsory.
Children whose parents are responsible for raising their children, but those who do not wish to be raised by parents can file a petition to a community organization at the age of 13. If you apply for independence at the age of 13, you can stay with the guardian educated at a community-run teaching institution.

Culture: Pancakes are the representative food and there are many different variations. Each region has its own recipe for pancakes, and a pancake festival is held on a national level on the second Wednesday of October. They make and eat traditional local pancakes while around a fire, and enjoying songs and performances. It is a tradition to eat pancakes every Wednesday, and many families still eat pancakes every Wednesday.