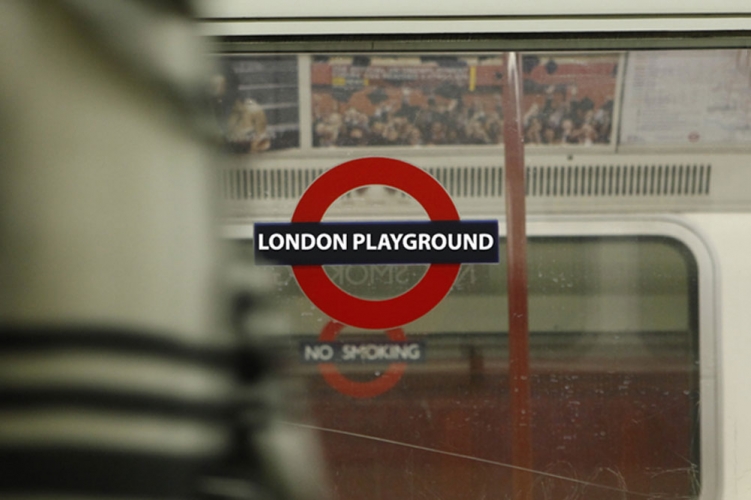 Whether you’re an everyday commuter, tourist, or student, in London you cannot help but notice the announcement on the tube, ‘Mind the gap, please’. Yes, it is a warning to make passengers aware of the physical gap between the platform and train, but doesn’t it also sound as though you’re about to step into the multicultural and multi-ethnic city of London? Could it not be considered a means by which to prepare to encounter gaps caused by those possible differences?

London is a truly dynamic city, where the multiplicity of different cultures and races constantly pass through as if it were a massive city ‘passage’. People from all over the world visit, stay and leave for the purposes of business, education or tourism, all kinds of exotic cuisines are introduced and appreciated and, as a result, various types of lifestyles cross over and coexist.

Korean artist Hyemin Park calls this London with diverse features a ‘Playground’, rather than viewing it as a location of conflict or collision. For her second solo show ‘London Playground’, Hyemin presents five performance-based artworks in which she shows how she lives and works in London, how she communicates with people in the city, and how she creates her own way of building up intimate relationships and memory with London and people on a daily basis.

Interaction Between You and Me

As a foreign artist and flaneur, Hyemin plays and strolls around London, observing the city, inviting people to take part in her works and collaborating with people engaged in the course of her performance. These passers-by become a critical part of her work through which they both collaborate to create something artistically meaningful and memorable. Without their personal responses and actual participation, Hyemin’s work would not go any further or move towards the next stage.

There are three live performance videos showing at the exhibition:

I believe I can fly (2009) is an improvised performance that Hyemin gave in response to another artist’s performance event held in Peckham Square. Hyemin walks around the square with a balloon and a paper on which she has written ‘I believe I can fly’ (the original title of the performance event held in the square), asking the audience whether she can collect their luggage and keep it for them, as if she were a moving human cloakroom. Here, Hyemin is an audience who correspondingly reacts to another artist’s performance with a specific action, while also being a performer who actively engages with people through her own performance on the same site. By playing two roles (simultaneously audience and performer), Hyemin cleverly blurs the typically distinct border between the passive audience and the active leading performer.

Stone upon stone, wish upon wish (2009) is a small ritual event during which wishes are made through building stone towers. In the corner of the park in Peckham, Hyemin asks people to put one stone on top of other stones and make his/her own wish. People stop by to follow her suggestion. Some seem to sincerely pray for their wish and share it with the artist. Others sometimes chat with her about their family and life for a while after the ritual, and then give her a smile and leave. Trick AND Treat (2010) is another piece where Hyemin attempts to share random neighbours’ happiness. On Halloween, the artist, dressed in a white angel dress and wings, moves from house to house, knocking on doors and treating handmade cupcakes, as well as wishing homeowners happiness with the words ‘Trick AND Treat’. People generally respond happily and express their gratitude for her favour and comment.

The artist’s amusing and friendly approach to local people and the community is well depicted in these three performance pieces. Hyemin makes herself a visible ‘doer’ in public, challenging strangeness and awkwardness in the face of potential barriers such as different nationalities, languages, and cultures. Regardless of how engaging or disappointing people’s reactions are, her naive wish for pure mutual communication and collaborative creation with participants is experimented with and questioned throughout her performative works. It seems to be a gesture of rejection against being a silent outsider and a marginalised foreign visitor in London by attempting to sincerely meet people in person.

Breaking through the superficial relationship between London and herself and the gap between audience and performer, Hyemin brings out more tailored and personalised collaborative works with the multinational participants’ specific memories and experiences related to London. The artist invites you to two major open calls in the show: Poems on the Underground (2009-2011) and To London, In London, From London (2011). These inspiring ongoing performance projects explore the city of London and its people, characterised as a passage and a montage of multicultural and international narratives and topographies. Mutual interaction between herself and the changing audience is essential here, too. Further, these projects are likely to include unexpected directions so that they will have more dynamic outcomes as the audience members like you are the ones who can play a leading role in changing the story.

Poems on the Underground (2009-2011) is an ongoing project which started in 2009. Inspired by the original Poems on the Underground, one of the Art on the Underground public art projects in London which were initially launched in 1986, the artist attempts to illustrate the ethnic diversity of London in an engagement with the public who create a poetic text made up of restaurant names. Participants living in London from various ethnic backgrounds compose a series of poems with the Chinese, Korean, Indian, Greek, Japanese, Turkish, and Thai restaurant names on the magnetic boards that the artists have collected from the different areas of London. Once these fragmented foreign words are rearranged, the newly found meanings of unique poetry language playfully emerge, while it is often impossible to understand all the foreign words or follow a linear storyline. It is completely detached from the original context of the restaurants and is transformed into a creative play on poetry words.

These poems are secretly exhibited on the underground in exactly the same format as the original Poems on the Underground. It is interesting to see how passengers on the tube read this somewhat peculiar nuance of installed poem, take it seriously and sometimes exchange their ideas with friends. People seem to fully appreciate it as a certain sophisticated poem and interpret its meaning in their own way. An exotic melody of restaurant names becomes once again a transformative and imaginative narrative, creatively interpreted by random Londoners on the tube. The words move across the lines, the poems move along the tube, and the poetry open call moves onto the next page.

With this open poetry competition, there is another on-going open call which people can take part in, To London, In London, From London (2011), which is a retrospective and prospective project at the same time. The project begins with tracing individual memory from the past and ends with reviving it for the future. One of the core ideas permeating Hyemin’s works is questioning certain memories, both her own and those of others, and transforming them into a ‘living story’.

The artist asks people who used to live in London - or who passed through London - to send a memorable photo of London with a related story. With this personal photographic memory, Hyemin draws the participant on the transparent board and takes a photo of it again at the same place where the participant took the photo, and then makes a postcard as a final outcome. The captured memory is then exhibited as a souvenir postcard in the gallery and is shared with the exhibition visitors. The artist expects the visitor to write a letter on the postcard and send it back to the initial sender with his/her own stories and memories inscribed.

Is this postcard simply passing one person’s memory to someone else just to recall a good time in London? Maybe not. If one thinks about the process that the postcard has made, one realises that this is not simply a single image of a personal memory presented. The memory has had a long journey to be here. The original sender recalled his/her own memory from the photographic record, which was passed over to Hyemin who depicted her interpretation as a drawing. She then took a photo of it, again at the place where the sender’s memory was once captured, reflecting the artist’s own memorial journey. This becomes a souvenir postcard which acts as a token of remembrance for the sender, the artist, and the exhibition visitor. The postcard is thus an index where multi-layered memories are simultaneously entangled.

More importantly, the memory itself is inherently insecure and incomplete as an attempt to restore the past as it was. Derrida once said ‘the archive takes places at the place of originary and structural breakdown of the said memory’ . What this means is that once one tries to recall and describe a certain memory that is captured in a photo or in a written form as an archive, it is already being distorted and slipping away from the original event per se. It can only contain a trace of what happened there in the past, not the thing itself.

In this sense, Hyemin’s archival postcards project has this ironic feature of the archival memory that slips away from its primary objective to preserve the past. Rather, it is constantly including the new multiple stories renewed by people who engage with the site so that it is moving onto future stories written and rewritten each time. As the process of this project effectively reflects this idea, Hyemin’s work is prospective as well as retrospective, since memory is not something found or collected from the past, but rather something that is made and continually remade towards the future.

Accordingly, Hyemin’s work is ongoing both on and beneath the surface levels: it is completed through the audience’s ongoing participation in terms of the physical structure of the performance on the surface, and there is also the ongoing transformative process caused by the inherent slippage of textual meanings and archival memories beneath the surface. This playful process, expanded futuristically, now happens in London where the non-stop flow of diverse cultures, races, and arts meet one another, waiting for your sincere interest in taking part in Hyemin’s projects. Be a part of the performative scene of the London playground with Hyemin Park.

The exhibition is held at the St. Martin-in-the-Fields gallery at the touristic heart of London, just off Trafalgar Square and the National Gallery. Attracting thousands of passing tourists, its open-plan structure linked to the cafe interestingly reflects the passage-like feature of the city of London and also Hyemin’s ongoing project by the public and for the public. London is truly a playground with its open mindset and friendly acceptance of public art so that it provides a good terrain for Hyemin Park’s experimental performance to explore, get into and break through the existing gaps and to communicate with and engage with the people who pass through London by collaboratively creating their resonant memories and experiences.