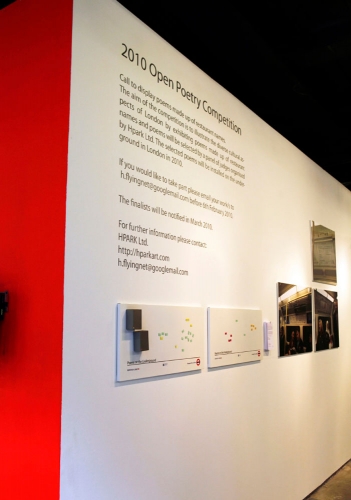 Poems on the Underground Installation view_Korean Cultural Centre in the UK_2009

Poems on the Underground, 2009-2010
I am living in London, one of the most international and diverse cities in the world, as a foreigner. In recent decades many different ethnic groups have migrated to Britain and they have adapted their own culture to the new environment. This modification of many different aspects of culture has caused the narrative cultural topography of this city to be made up of the montage of different cultures and the discontinuity of spatial structure. Therefore when I embarked on my practice here I explored London; especially ethnic communities containing specific cultural characteristics such as China town, Hackney and Southall.
I think that food is one of the most significant aspects that indicate one’s own culture and so I started to collect restaurant names form different areas in London. In my project, Poems on the Underground, I attempted to illustrate the ethnic diversity of London also to engage with the public by creating a poetic performance text made up of restaurant names. With the help of participants living in London from various ethnic backgrounds including Chinese, Greek, Indian, and Turkish backgrounds, I arranged these restaurant names to compose a series of poems themed on each ethnic group. Then these were printed onto posters that were of the exact same format as the original ‘Poems on the Underground’, installed onto the underground trains and were left there for people to see.

2010 Open Poetry Competition : Magnetic Poetry
Call to display poems made up of restaurant names.
The aim of the competition is to illustrate the diverse cultural aspects of London by exhibiting poems made up of restaurant names and will be selected by a panel of judges organised by Hpark Ltd. The selected poems will be installed on the underground in London in 2010.
If you would like to take part please take a picture of your magnetic poetry with a camera gallery provides or email your poem/s to h.flyingnet@googlemail.com before 6th February 2010.
The finalist will be notified in March 2010.

This is not a gateway festival: Poems on the Underground@TINAG_2010